Legend of the Five Rings Under Fu Leng’s Shadow L5C42

The Canadian Release Date of May 7 2021 but product was extremely allocated.

The Shadowlands have always threatened the southern border of Rokugan—but now, the aimless and disorganized hordes of foul goblins, shambling undead, lost samurai, and hideous monsters have been united under a single vicious ruler. A monstrous oni stomps toward the Emerald Empire, leading waves upon waves of deadly foes to breach the Great Carpenter Wall. It is the greatest threat that Rokugan has faced in centuries—and even if the clans can unite, there is no guarantee that they will survive.

Fantasy Flight Games is proud to announce Under Fu Leng’s Shadow, a new Premium Expansion for Legend of the Five Rings: The Card Game!

This Premium Expansion is stuffed with 271 new cards for Legend of the Five Rings: The Card Game, and at the same time, it introduces two brand-new ways to play the game! Almost half of the new cards contained in this expansion are fully dedicated to the brand-new Shadowlands faction, and you can battle against the awe-inspiring might of the Shadowlands using two new game variants. You might choose to play the cooperative variant, either playing solo or teaming up with your friends to take on a mighty Shadowlands warlord. Or, you could embrace the darkness in a challenge variant, allowing one player to lead the forces of the Shadowlands into battle against two to four other players.

Whether you battle the rising darkness together with your friends, challenge them to fight the Shadowlands hordes under your command, or use this expansion’s clan cards in your stronghold or skirmish games, Under Fu Leng’s Shadow is packed to bursting with exciting new content for every Legend of the Five Rings: The Card Game player. 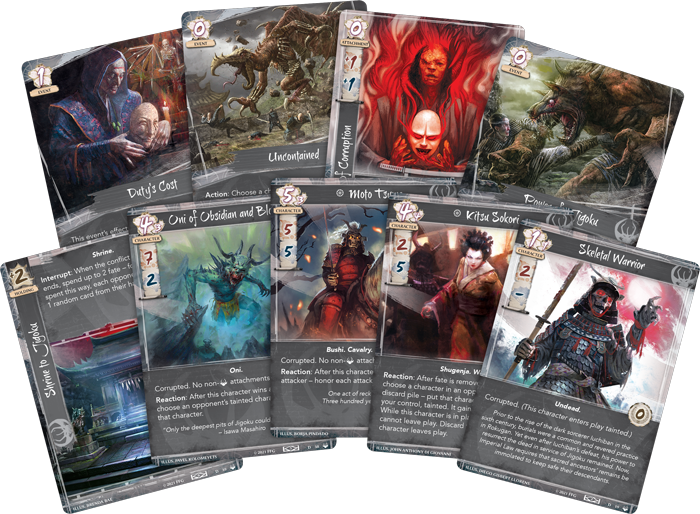 The Power of the Shadowlands

For the first time with Under Fu Leng’s Shadow, you have the chance to play Legend of the Five Rings: The Card Game with two entirely new variants: cooperative and challenge. Whether you’re playing the fully cooperative mode or taking command of the Shadowlands creatures yourself, there’s one essential element of the Shadowlands armies—their warlord. 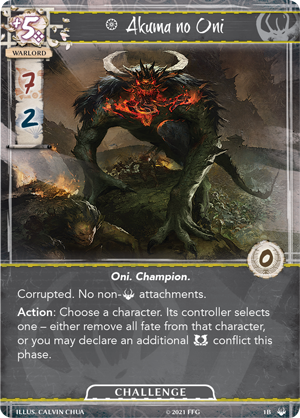 As a disconnected rabble of undead, tainted samurai, goblins, ogres, oni, and other monstrosities, the Shadowlands forces have no stronghold to rally around and defend. They are united only by the might of a single warlord, who forms the centerpiece of their armies in the game. There are three distinct warlords included in Under Fu Leng’s Shadow, represented by double-sided cards with tweaked abilities to reflect the cooperative variant or the challenge variant. No matter which way you’re playing, each of these warlords brings a different flavor to the battle against the Shadowlands.

For example, you may choose the monstrous Akuma no Oni (Under Fu Leng’s Shadow, 1B) to lead your Shadowlands army into battle. As the replacement for the stronghold, the warlord determines how much fate the Shadowlands will generate each round—in this case, five per player. Your warlord isn’t always in play as a character, but its abilities are always active and you can use them to shape the battlefield even when the warlord is out-of-play, such as Akuma no Oni forcing your opponents to choose between losing all fate from their best character or giving you an additional military conflict.

Your warlord can bring its formidable skill to bear in your conflicts by playing certain Shadowlands cards, such as Direct Assault (Under Fu Leng’s Shadow, 57). When it enters play, Akuma no Oni’s skills are further enhanced by the corrupted keyword, which brings Akuma no Oni into play with a new Tainted status card.

This status card can be given to characters or provinces, and it increases the character’s skill or the province’s strength—but you must sacrifice honor to use your Tainted card. Of course, the Shadowlands abominations care nothing for Rokugan’s concepts of honor. In cooperative or challenge variants alike, the Shadowlands have no honor, and never need to pay honor for effects like the Tainted status card, making this a powerful benefit to their forces. 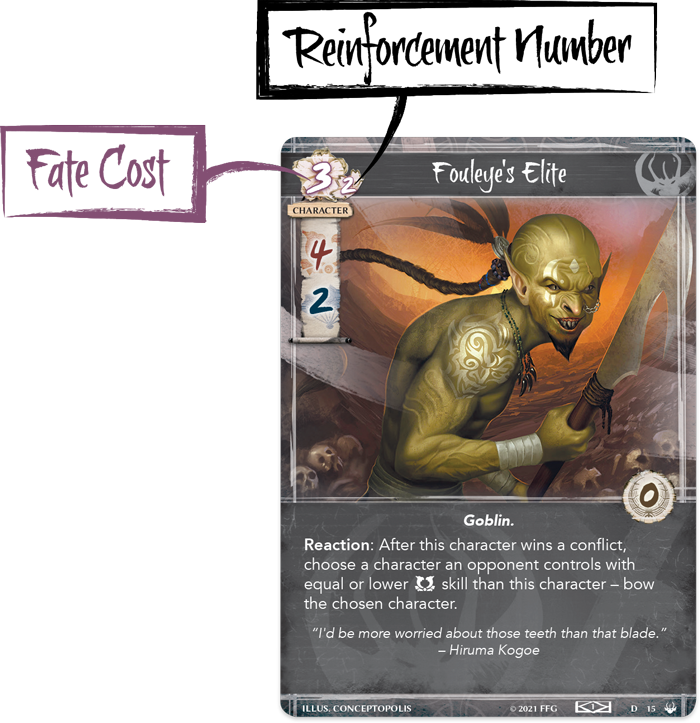 Even a simple Goblin like Fouleye's Elite (Under Fu Leng’s Shadow, 15) can be more persistent than it would first appear. When a Shadowlands creature enters play, rather than paying additional fate to keep this character in play longer, the character automatically gains fate from the fate supply equal to its reinforcement number. For example, the Shadowlands must pay three fate to bring Fouleye’s Elite into play, and then they place two additional fate on this character. And there are far more dangerous creatures than goblins lurking within this expansion. 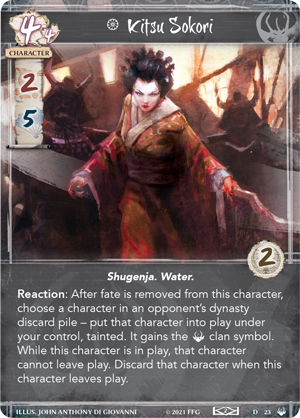 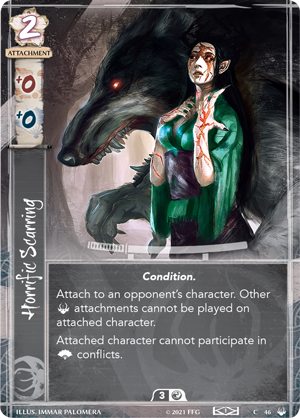 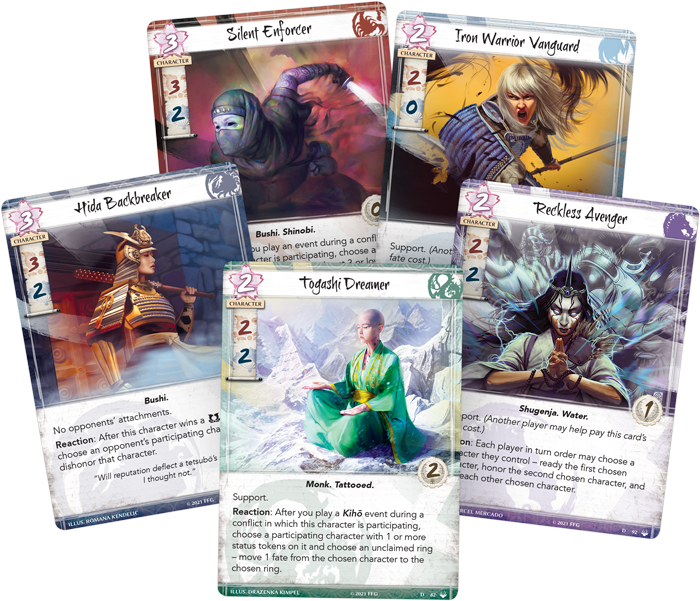 Though the new Shadowlands cards offer exciting new challenges for every player, this Premium Expansion is also filled with new cards that are valid in your standard stronghold and skirmish games.

Two new strongholds burst onto the field to introduce new possibilities for the Phoenix and Scorpion Clans. With Twin Soul Temple (Under Fu Leng’s Shadow, 74), the Phoenix Clan can twist the very elements to fit their needs, unlocking the powers of their Shugenja. Or perhaps, you’ll make your opponent feel the sting of dishonor with Shiro Yogo (Under Fu Leng’s Shadow, 75)—when you bow this stronghold, you can choose a dishonored character and prevent it from triggering its abilities this phase. 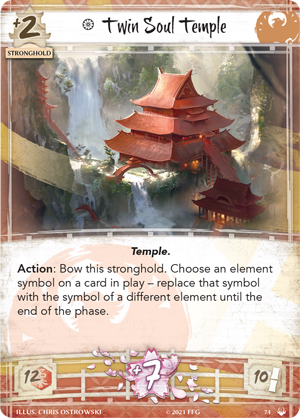 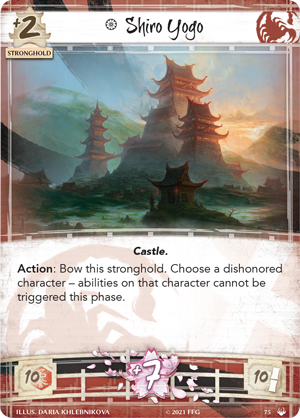 Though the Great Clans of Rokugan are dedicated to fighting against the power of the Shadowlands, that doesn’t mean that they’ve escaped untainted by its dark influence. In fact, you’ll soon find that many of the new cards included in this expansion, such as Exiled Guardian (Under Fu Leng’s Shadow, 76), feature the corrupted keyword, which means they enter play with the Tainted status token. If you’re willing to pay with your honor, however, Tainted characters can be a powerful asset in your battle against another clan. 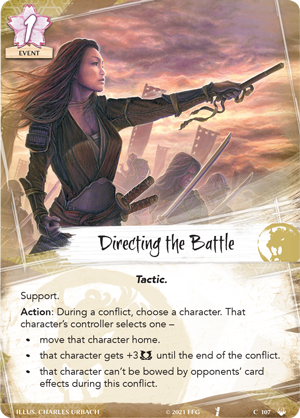 For every clan, you’ll find exciting new options contained within Under Fu Leng’s Shadow. And with the new deckbuilding questions posed by the cooperative and challenge variants introduced in this box, you’ll have another chance to plumb deep into the cardpool for every clan, perhaps reevaluating cards that had previously been overlooked!

We Are All Defenders of Rokugan

The Crab Clan’s defenses are formidable, but they cannot stand against the hordes of Akuma no Oni on their own. Every Great Clan must unite against their common threat, but even then, victory is not assured. Strike your own blow against the Shadowlands or lead their forces into battle with the Under Fu Leng’s Shadow Premium Expansion, planned for release in May 2021.